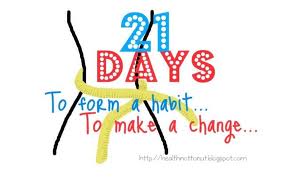 Ok, so you’ve decided to make a change and bring on a new happiness habit  (or any new habit really).  There are two numbers to keep in mind: 1 and 21.  What does that mean?  Choose ONE habit and keep at it for 21 consecutive days (yes that means, work days AND weekends!).

Why only ONE habit at a time?
Developing a single new habit (and the neuro-pathways to support it) is difficult.   Our brains don’t like change.   The ruts they’re in are just fine, thank you very much.  Trying to integrate more than one habit at a time dilutes your effort and significantly increases the likelihood of failing and giving up on making any change at all.

You’ve got your whole life to make positive change; you don’t need to do it ALL right now.  So pick the one habit that sounds most interesting to you and give it your full attention for a month to really lock it in.

Why 21 consecutive days?
In 2008, Shawn Achor led a large study to test the 5 specific habits I summarized last week: gratitude, mindfulness, acts of kindness, exercise and finding meaning.  As his subjects, he chose a large group of tax managers at the accounting firm, KPMG (not a group generally known for their optimism and sunny dispositions ☺).

All participants in the study were evaluated to determine their general sense of well-being, their level of engagement at work, whether they were depressed, etc.  One group of managers implemented one of the 5 habits for 21 consecutive days and another group (the control group) made no change.  On every metric, the experimental group’s scores were significantly higher than the control group’s scores shortly after the study was completed.  Amazingly, when they were tested again 4 months later, the experimental group maintained significantly increased scores in both optimism and life satisfaction.

How 21 Days Can Help
We are creatures of habit.  Your habit is probably to jump right into your work email when you get into the office, not write an appreciative email; to go to bed right after brushing your teeth at night rather than spend two minutes writing down your gratitudes and to keep working through the 10 am hour rather than take a break for 2 minutes of meditation.  These are well-established habits that run down well-worn neuro-pathways in your brain.

21 days of a habit can change the structure of your brain
Neuroscientists say ‘neurons that fire together, wire together.’  When you start a new activity, the links between the neurons of that make that activity happen are not very strong.  But each time you do the new activity, you create new connections (synapses) between those neurons.  The more consistently you do the activity, the stronger those connections become which  makes it easier and easier to do that meditation, exercise, gratitude or act of kindness the next time.  21 consecutive days is enough establish strong neuro-pathways for this new activity and help it become a regular habit — something you can start to do as automatically as brushing your teeth.

21 days gets you over the resistance hump. Your brain likes the status quo and HATES change.  It likes to keep things the way they are to conserve energy.  For example, you don’t have to waste energy thinking about brushing your teeth before you go to bed or debating the benefits of showering before you go to work (at least I hope you don’t!). You just do it.

And when you try to change a well-worn pattern by committing to something different for 21 days in a row, your brain is sure to resist, so be ready for it.  And know that your brain doesn’t always play fair. Even though these exercises require only a couple minutes, your brain may say things like, “I need to get this project done right now. I’ll do my meditation later.” or “This is stupid. I’ve been doing this for 5 days and I don’t feel any different.  It probably isn’t going to work for me. I may as well stop now.”

Our brains are REALLY good at justifying why we shouldn’t continue to make a change.  Look at this resistance as a good sign that you are starting to change those habits.  It’s important to commit to getting through this resistance when it happens and following through on the full 21 days.  (Next week, I’ll share some important tips on how to set up your new habit for success, even with the resistance the brain will put up.)

21 days starts to change the patterns through which you see the world
As you continue to practice looking for what is good in your life and looking for how you can improve someone else’s day, it starts to change how you see the world.  As you get through the 21 days, these practices can start to take hold at a deeper level.  Your brain changes the patterns through which it sees the world from “What’s wrong with the world?” and “How is the world effecting me?” to “What’s working in my life?” and “How can I effect the world?”  The default setting of our brains goes from negativity, stress, uncertainty and frustration to gratitude, happiness, seeing the possibilities for change and ways to ripple that positivity out to others.  These habits simply help us be more optimistic, hopeful and engaged.

But we take advantage of these changes by consistently doing something a new way.  This is the ONLY way to make change stick.  Decide what you want to do and commit to doing that activity consistently for 21 days.

Next week we’ll be talking about specific tricks to help push through your silly change-hating brain’s resistance and solidly integrate these new habits into your life.

P.S.  To receive these posts directly into your inbox each week, simply sign up in the form on the right hand side of this page.  You’ll also receive access to my most recent free webinar on the science of happiness (positive psychology).