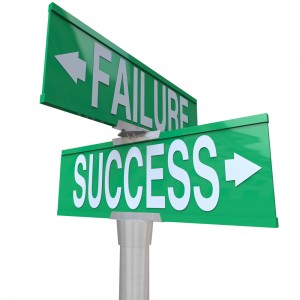 Failing.  Making mistakes.  Falling down.  Messing up. These words fill many of us with fear and dread, with embarrassment and shame.  We think we’re supposed to set goals and achieve them one after the other.   But that’s not the way life works.

“Failure is an inescapable part of life and a critically important part of any successful life.  We learn to walk by falling, to talk by babbling, to shoot a basket by missing, and to color the inside of a square by scribbling outside the box.  Those who intensely fear failing end up falling short of their potential.  We either learn to fail or we fail to learn.”  – Tal Ben Shahar, The Pursuit of Perfect

Most of us have heard by now about famous “successes” that had high profile failures.  Michael Jordan was cut from his high school’s basketball team.  The Beatles were rejected for a recording contract because “guitar bands are on their way out.” Walt Disney got fired from a newspaper job for not being creative enough.  But somehow, knowing we’re in great company doesn’t make the process of failing any easier.

Like everyone, I have struggled with failing to meet my own expectations.

When I left the comfort of a successful biotech career to become a happiness coach, I worked my tail off with workshops and marketing.  Some of them were mildly successful but many were total failures.  The voices in my head  panicked and began screaming to stop this crazy experiment, to go back to the safety of a biotech job.  I began to talk myself out of workshops, and then my entire new career path.

This is the danger point with failure: that a few setbacks make you question the entire enterprise and can stop all forward progress.  But there are ways to change this perspective, to keep a failure from being debilitating.  Here are several tools:

When something doesn’t go according to plan, take the time to digest what happened, to figure out what derailed your efforts.  See it as a challenge and an opportunity to learn more and grow.  Get curious about how and why the failure happened and what you can do better.  This can energize you to try again in a smarter way.

Circle back to your original goals: are they still appropriate?  Have you learned something that might create a better opportunity?   Sometimes you can find possibility halfway through a project – at “failure” even – that wasn’t visible when you started.

If we can get ourselves to accept that failure is not an unfortunate occurrence, but is actually required to learn, we can be better able to deal with it when it happens.

Set ambitious but attainable goals and expect to achieve many of them in your life.  But also expect detours and challenges that will take time to get through and failures that may require you to rework your plans and assumptions.  Imagine your path to success not as a direct line from here to your goal, but as a winding path, always moving towards your goal, but with deviations and explorations that increase your learning.

While it seems counterproductive, psychologists recommend that you fail early and often.

“We can only learn to deal with failure by actually experiencing failure, by living through it.  The earlier we face difficulties and drawbacks, the better prepared we are to deal with the inevitable obstacles along our path.”  – Tal Ben Shahar, the Pursuit of Perfect

So much better to start a project, take the first steps and see what happens.  Then adapt.  Trying to foresee every eventuality to always get it right the first time is a recipe for stagnation and inaction.

Take on those voices in your head

If your self-talk is full of fear of failing or jumps on you for any small mistake, use some of the other tools we’ve talked about in previous posts:  Dispute the voices in your head and actively choose your board of directors .  Use the facts you’ve learned in this post to argue against their fear-based rationale.  And get moving towards your goals!

“If I find 10,000 ways something won’t work, I haven’t failed. I am not discouraged, because every wrong attempt discarded is another step forward.” – Thomas Edison

“Only those who dare to fail greatly can ever achieve greatly.” – John F. Kennedy

P.S.  To join the Happiness Infusion email  list, sign up in the form on the right hand side of this page.