A Positivity Ratio to Tip You to Flourishing?August 25 , 2011 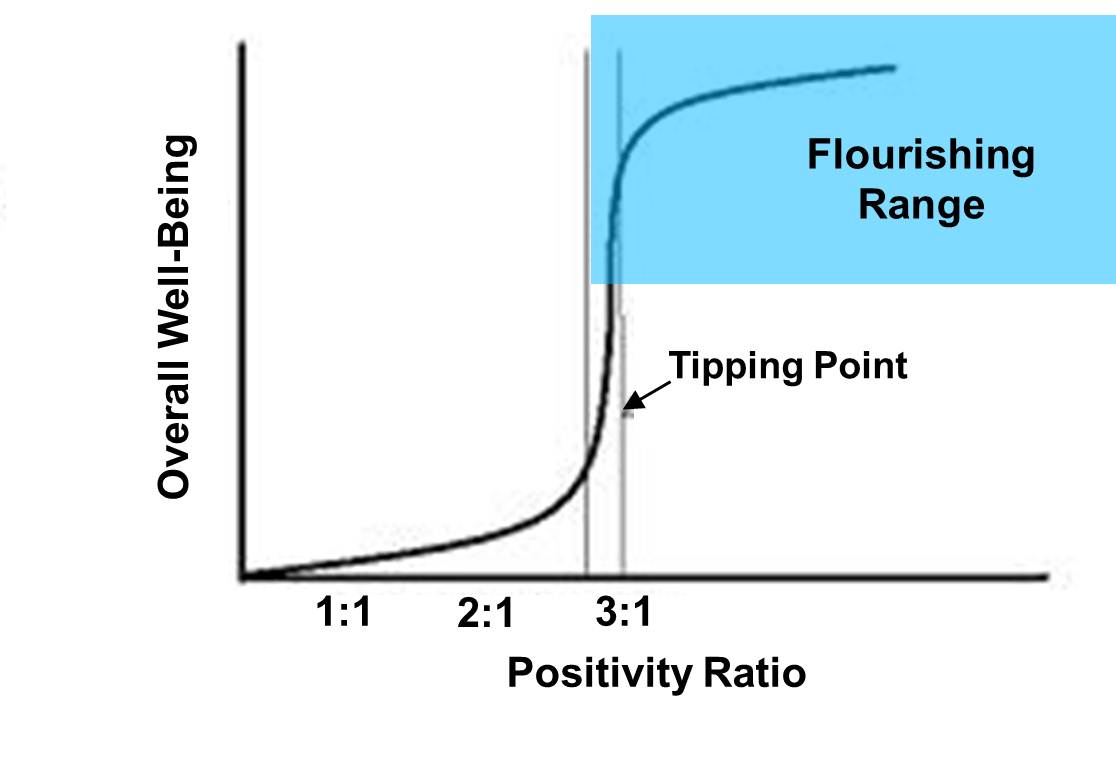 Or “The Happiness Tipping Point”

NOTE:  The idea of Positivity Ratio of 3:1 as a magic gateway to flourishing was challenged in a 2013 American Psychologist article by Brown, Sokal and Friedman.  Losada, who managed the non-linear mathematical equations, was not able to mount a mathematical rebuttal to this critical review.   A response by Fredrickson in the same American Psychologist issue stepped away from the 3:1 ratio as a defining turning point.  However when looking at the raw data (and not the complex mathematics), Losada’s qualitative conclusions still show that higher numbers of positive interactions are associated with higher performing business teams.  And Fredrickson’s data (and many others) show that more experiences of positive emotions are associated with personal flourishing.  – Eric Karpinski, December, 2013

One thing that science has shown — and all of us have experienced — is that when we feel a positive emotion, it often leads to other positive emotions.  When we’re happy, we naturally focus on the good things in our lives and feel grateful for what we have, which further increases our happiness.  When happy, we approach other people with a smile and a sense of trust which makes them want to help us, and again our happiness increases.  This upward spiral of positive emotions can help us live the life we want.

Negative emotions follow a similar pattern.  We’ve all had experiences where a frustration at work causes self-doubt which leads to not doing our best.  Sometimes, we can bring this frustration home and overreact angrily to a family member or friend.  This can lead to guilt which further compounds our negative feelings.  Because negative emotions have a strong physiological component, these negativity spirals can knock us down for hours or even days.

Researchers have studied this interplay of positive and negative emotions and have recently discovered a tipping point in our emotional life.  A tipping point is a place where a small change can have a disproportionately large effect.  A good example of a tipping point is ice and water.  At -1ºC H20 is solid ice but raise the temperature just two degrees and it turns into flowing water.  In psychology this magic number is expressed as a positivity ratio — the number of positive emotions you feel over a given time divided by the number of negative emotions you feel in that same time period. This graph illustrates this idea:

Below 3:1 the effect of increases in positivity on our overall sense of well-being are relatively small.  Our positive emotions here are more fleeting and susceptible to being squashed by negative emotion.  But above 3:1, we’re in a world of many upward spirals that feed on each other and keep our overall happiness high.  Above this ratio, setbacks are easily dealt with or seen as longer-term challenges rather than insurmountable blocks to what we want.  In short, above 3:1, we enter what scientists call flourishing; a state of optimal human functioning that is marked by creativity, growth, productivity and resilience.

This 3:1 ratio was first discovered by Marcial Losada through an in-depth study of 60 business teams.  He and his assistants carefully observed and recorded each team in an hour-long business meeting and coded every single statement as positive or negative (among other dimensions).    Later he evaluated each team on profitability, customer satisfaction and evaluations by superiors/peers/subordinates.   Those teams that were independently shown to be high performing – highly profitable and well regarded by those with whom they did business — had positivity ratios around 6:1 (the number of positive to negative interactions in this case).  By contrast, low performing teams had positivity ratios well below 1:1 and mixed performance teams had ratios around 2:1.  Losada developed equations that modeled this nonlinear dynamic system and found that the tipping point that transformed a business team from middling to flourishing was 2.9013 : 1, which for simplicity we round to 3:1.

Losada joined with Barbara Fredrickson, one of the leading researchers in positive psychology, to evaluate this positivity ratio in individuals.  They conducted a series of analyses and found that this same 3:1 ratio is a tipping point that pushes individuals into flourishing.  They showed that people with ratios higher than 3:1 feel more alive, creative and resilient.  They have a palpable sense of personal growth and of making a positive difference.  Below 3:1, the people in these experiments are in a state of languishing where their life is rather ordinary. They get by, but are hardly growing and not moving toward what they want most in life.

The great news here is that most people have positivity ratios around 2:1, not far from the magical 3:1 number.  Using tested positive psychology tools and habits for increasing our share of positive emotions and decreasing gratuitous negativity, getting to a 3:1 ratio is feasible.  If you can increase your ratio, it will open you up to a flourishing, more engaged and happier existence. Stay tuned next week as I share one of the simplest and most powerful tool for increasing your happiness.

So, are you curious about your own positivity ratio?  You can test it on Fredrickson’s website, click on “Take the Test”.  Try it out for a few days and see where you are.   I tracked my own positivity ratio for several months earlier this year.  I found it to be a powerful way to bring more awareness to my day-to-day emotional state.

I also highly recommend Fredrickson’s book, Positivity.  It is full of the most recent and powerful science in positive psychology and it is presented in a warm and accessible way that non-scientists can understand.

You can sign up to receive these “happiness infusion” posts directly to your inbox, just sign up on the right hand side of this page.